The end of Beatle-marriage: respectable lawyers help Paul and Heather

Small wonder Britain's newspapers are salivating over the ever-uglier divorce case of former Beatle Paul McCartney and Heather Mills McCartney - and comparing it to the 1996 royal divorce that titillated the tabloids for months. 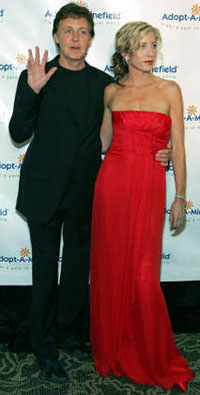 The end of Beatle-marriage: respectable lawyers help Paul and Heather

McCartney, who does not have a prenuptial agreement to protect his fortune, has hired Fiona Shackleton, who represented Prince Charles and is nicknamed the Steel Magnolia. Shackleton's firm said it also represents princes William and Harry.

Mills McCartney has hired Anthony Julius, who represented Diana. Nicknamed Anthony Genius, he helped Diana win a multimillion-dollar settlement. Afterward, the princess gave him a silver ink blotter engraved, "Thank you for giving me back my wings."

Though the 64-year-old entertainer and 38-year-old anti-landmine campaigner had promised an amicable split, the facade cracked earlier this week when she found the locks changed at a home they once shared, according to the AP.

The couple married in June 2002, four years after McCartney's first wife, Linda, died of breast cancer. Linda and Paul McCartney married in 1969 and had three children.