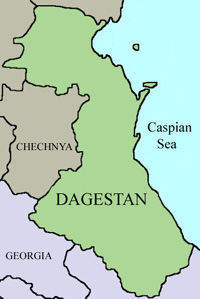 A parked car exploded as Bitar Bitarov, a prosecutor in the town of Buinaksk, was passing by on his way to work, said the spokeswoman, Anzhela Martirosova. After the explosion, the prosecutor's car and two others accompanying him came under fire.

Dagestan Interior Minister Adilgerei Magomedtagirov and accompanying police were fired on as their vehicles approached the blast scene to investigate and one officer was wounded, the ministry said.

Dagestan has long suffered violence by criminals and militants, some of it tied to the separatist conflict in neighboring Chechnya, some connected to political infighting, and some growing out of turf fights over fishing and other lucrative economic activities, the AP reports.