Schwarzkopf, ranked alongside Maria Callas as a giant of the opera and concert stage, died about 1:15 a.m. in the town of Schruns in Austria's westernmost province of Vorarlberg, where she most recently lived, state broadcaster ORF said, citing a local funeral home director. No cause of death was given. 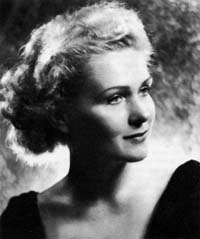 Schwarzkopf, who retired in 1975 after many years living outside Zurich, Switzerland, captivated audiences and critics alike during a career that spanned four decades.

Her leading roles, ranging from Elvira in Mozart's "Don Giovanni" to the Marschallin in Richard Strauss' "Der Rosenkavalier," were immortalized on records and CDs. So were her recitals of lieder - German songs of a lyrical, often popular character, the AP reports.

After her retirement she admitted having applied to join the Nazi Party in 1939, but she said it was "akin to joining a union" so that should could further her singing career.

Performing with an array of famous conductors, including Wilhelm Furtwaengler, Otto Klemperer, Vittorio de Sabata and Herbert von Karajan, she was what Italian opera aficionados would call a "diva assoluta" - an absolute star, acording to the AP.