The leftist leader, known for his fiery criticism of Washington, also expressed shock Tuesday at learning that Cuban President Fidel Castro had temporarily ceded power for the first time in 47 years because of health problems. 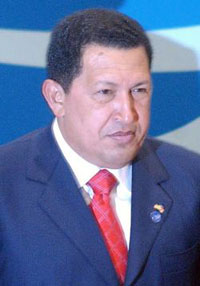 Chavez, the first-ever Venezuelan leader to visit Vietnam, said he felt as "one would have toward a good friend" when he heard news of Castro's illness, which he described as "worrisome."

During his visit, Chavez signed three cooperation agreements with Vietnamese President Nguyen Minh Triet, including one dealing with energy, the AP reports.

Vietnam is building its first oil refinery plant in a central province. Currently, it exports all its crude oil and imports refined oil products.

Chavez praised Vietnam for winning independence from colonial ruler France and defeating the U.S. in the Vietnam War, saying its battles against "imperialism" had set "a big example for the world."

Chavez was also scheduled to meet with Gen. Vo Nguyen Giap, the mastermind of Vietnam's defeats of France and the United States. He was also due to meet with Communist Party Chief Nong Duc Manh and Prime Minister Nguyen Tan Dung before departing Tuesday.

Chavez traveled to Vietnam as part of an international tour that has already taken him to Belarus, Russia, Qatar and Iran. He also plans to visit Mali and Benin this week.