The 32-year-old supermodel also appears in a photo spread inside the magazine, which hits newsstands Aug. 8. In two photos, she sports an androgynous look - wearing a black hat, jacket and tie - inspired by Marlene Dietrich. In another, she channels Dietrich in the 1934 movie The Scarlet Empress by posing in a white gown draped around her waist. 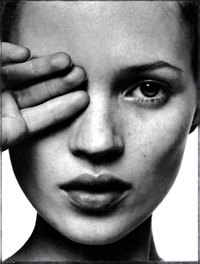 Moss has the top spot among the rich and famous featured in the magazine's international best-dressed list for 2006, the AP reports.

The sexy Vanity Fair cover is the latest move in Moss' career comeback. She entered a drug rehab clinic in Arizona last year after pictures of her allegedly using cocaine were published in a British tabloid. In June, prosecutors said there was insufficient evidence to charge Moss.

Although Moss lost contracts with Chanel, H&M and Gloria Vanderbilt after the photos were published, she has signed new modelling contracts and appeared on several magazine covers, including the December issue of Vanity Fair.

She has maintained her relationship with Burberry, and can be seen in the company's new ad campaign, the AP reports.