Madonna and punk quartet Panic! At The Disco make five categories, while James Blunt is up for best male video. 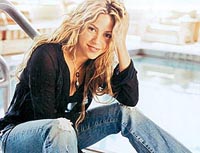 Justin Timberlake, Beyonce Knowles and Ludacris will be among the performers at the event in New York on 31 August.

The awards return to the city after two years in Miami, with MTV promising "a little bit of that New York danger".

Dani California by Red Hot Chili Peppers and Shakira's Hips Don't Lie - currently number one in the UK - are both nominated for video of the year.

They are competing with Madonna's Hung Up, Ain't No Other Man by Christina Aguilera and Panic! At The Disco's I Write Sins Not Tragedies.

Former 98 Degrees pop star Lachey recreated his break-up with Jessica Simpson in the video for What's Left of Me.

Shakira is up against Kelly Clarkson, Nelly Furtado, Madonna and Aguilera in the best female video category.

The best group video is between the All-American Rejects, Fall Out Boy, Gnarls Barkley, Panic! At The Disco and the Red Hot Chili Peppers.

And a "soundtrack" for the awards show will be provided by the Raconteurs, the band led by Jack White of the White Stripes.

For the first time, MTV viewers can also vote in every category, not just the Viewer's Choice, according to Reuetres.