People waved Cuban flags on Little Havana's Calle Ocho, shouting "Cuba, Cuba, Cuba," hoping that the end was near for the man most of them consider a ruthless dictator. Lighting cigars, banging pots, cheering and dancing, they recalled their own flights from the communist island or those of their parents and grandparents. 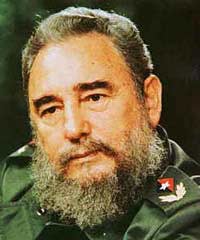 Castro said in a statement read on Cuban television that he had suffered intestinal bleeding, apparently due to stress from recent public appearances in Argentina and Cuba.

Castro said that extreme stress "had provoked in me a sharp intestinal crisis with sustained bleeding that obligated me to undergo a complicated surgical procedure."

Castro also requested the celebration of his 80th birthday on Aug. 13 be postponed until Dec. 2, the 50th anniversary of Cuba's Revolutionary Armed Forces, the AP reports.

Congressman Lincoln Diaz-Balart, a Miami Republican, added: "This is a clear reminder that the end of the Castro regime is approaching, and that the only solution is free elections and the rule of law."

Many on the street thought Castro was already dead.