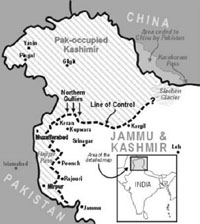 Separatist politicians and armed militants reject Indian sovereignty in Kashmir, India's only Muslim-majority state, and want to carve out a separate homeland or merge the Himalayan region into India's Islamic neighbor Pakistan.

Many local lawyers held a protest march and announced a boycott of Kalam's speech at the Jammu-Kashmir state High Court.

Shops, schools and offices closed down and traffic was thin on roads in Srinagar, Indian Kashmir's summer capital. Kashmir University and other schools canceled exams scheduled for Friday and Saturday due to security concerns.

Police stepped up security in the already heavily militarized city and erected additional checkpoints on Srinagar's roads, the AP reports.