Sherlock fans fighting against developers to save Conan Doyle’s house

Undershaw, an imposing red-brick edifice in a dry and sheltering valley near Hindhead, south of London, is credited with helping Louise Conan Doyle, known as Touie, to live an extra 13 years. 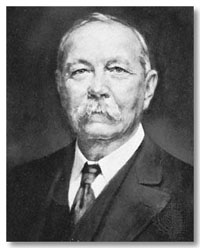 Sherlock fans fighting against developers to save Conan Doyle’s house

Today, Undershaw's windows are boarded, its ceilings discolored by mildew, the author's beloved tennis court swamped by a meadow of long, waving grasses. And the house's future is uncertain: A developer who bought the site in 2004 is determined to build on it.

Des Moore had initially planned to divide the house into apartments, but the local council refused its permission in May after complaints from conservationists and Conan Doyle fans. He later withdrew an application to subdivide the site into separate building lots.

The Victorian Society is leading the campaign to save the house. It has urgently asked the conservation group English Heritage to move the house higher up the list of important historical buildings, making it harder to change it. But that could take several months.

Conan Doyle bought the 3-acre (1.2-hectare) plot at Hindhead in 1895, and his friend, the architect Joseph Henry Ball, designed the house.

Two stained glass windows display the crests of Conan Doyle's ancestors, their bright colors now faded. All the doors are hinged both ways, because the energetic writer did not like wasting time turning door handles. The initials ACD are engraved in woodwork and on garden gates.

Ferry said the house should be restored and let, with the public admitted on certain days, like Thomas Hardy's house, Max Gate, near Dorchester in southwest England.

During his decade at Undershaw, Conan Doyle resurrected Sherlock Holmes in "The Hound of the Baskervilles" and "The Return of Sherlock Holmes." The famous sleuth in the deerstalker hat had apparently been killed off in the 1893 novel, "The Final Problem."

While at Undershaw, Conan Doyle, a doctor by training, was also knighted and ran unsuccessfully for Parliament as a Liberal Unionist in the 1906 national election.

And it was from Undershaw that Conan Doyle launched his campaign to clear Birmingham lawyer George Edalji on charges of mutilating livestock.

Among those who hate the idea of carving up the house is author Julian Barnes, whose Booker Prize-winning novel, "Arthur and George," recounted the Edalji story.

Nick Utechin, editor of Britain's "Sherlock Homes Journal," said developers appeared to have given no thought "to the incredible importance Conan Doyle has in popular literary culture."