Tommy Gorman, president of the National Taxi Drivers' Union, said about 85 percent of cabbies went on strike starting at 5 a.m. Monday. They were scheduled to resume work at the same time Tuesday. 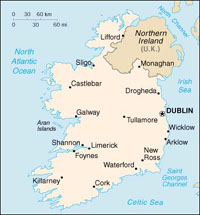 Taxi drivers mounted pickets at several cab pick-up points in central Dublin. At the airport north of the capital, arriving passengers faced two-hour waits for bus services as the taxi line was empty. A handful of hackney drivers and nonunion cabbies dropped off passengers at the airport, but were forbidden to pick up any passengers.

The strike was a reaction to a government regulator's plan to standardize the minimum fares charged by taxi drivers across this country of 4.1 million. The plan, due to come into force in September, would make the minimum national fare US$4.75. That would be US$1.25 higher than the current minimum fare in Dublin, but much less than in rural parts of Ireland, where minimum fares start at US$7.50.