France's interior minister promised Friday to send massive police reinforcements into the streets for the World Cup final and urged revelers not to spoil the party by getting out of hand. 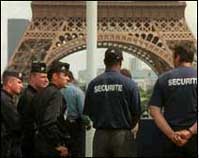 Nicolas Sarkozy said Sunday's festivities must "not be ruined by a minority of thugs," and his ministry said 4,000 extra police would be on patrol for the France-Italy match.

"We are doing everything so that the party will be as beautiful as possible," Sarkozy said.

He added: "It will be even more beautiful if we win."

While celebrations after France's 1-0 semifinal win over Portugal Wednesday were mostly peaceful and energized, police took 350 people into custody, 190 of those in Paris, the interior ministry said. Some 45 police officers were injured.

"There were scenes of violence Wednesday that were not admissible," Sarkozy said.

Several people also died during festivities after the match. Two were killed in traffic crashes. One man died from a knife wound to the neck, another was killed after climbing atop a subway car in Paris, and yet another was killed jumping from a bridge during the frenzy.

Street parties after major soccer wins or on New Year's Eve often end with scattered violence. But police have been especially vigilant following riots that broke out last fall in troubled neighborhoods where many immigrants from Africa live with their French-born children, reports AP.