With smiles all around, the seven astronauts of the space shuttle Discovery entered the international space station Thursday, breezing through the difficult link-up with ease to bring their German colleague to the station where he is slated to remain when the craft returns to Earth in 10 days. 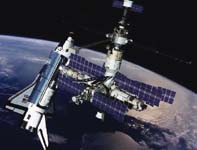 "We achieved one of our, of course, major goals of this flight," Ceccacci said.

The two men aboard the space station snapped 350 photos of the approaching shuttle to document any damage to the thermal skin, Ceccacci said. There was no immediate word on whether any problems were noted in the 125 pictures beamed to Mission Control as of early afternoon.

Even though the mission was going smoothly, the control center had not returned to a sense of normalcy, Ceccacci said. "It's more of a sense of, 'Hey, the things we've done to make the ... tank better are working,"' he said, reports AP.

Wednesday, Discovery's crew used the orbiter's robotic arm to take photographs of the shuttle's wings and nose cap. Nothing of major concern has been detected.

The shuttle is delivering several tons of supplies and equipment, including a new oxygen generator. One crewmember, Mission Specialist Thomas Reiter of Germany, will remain on the space station for six months. At least two space walks are planned in coming days.

The target date for completion of the International Space Station is 2010, at which point the shuttle fleet is scheduled to be retired, informs Voice of America.

According to a NASA cargo manifest, Discovery is hauling more than 3.6 tons of supplies, equipment, food and spare parts to the ISS, some of which is tucked inside the orbiter’s Italian-built Leonardo module, while more is stowed in the spacecraft’s middeck and payload bay platforms.