The girls, Hu Jingxuan and Hu Jingni, were born last August joined at the abdomen. They shared a liver, spleen, gall bladder and digestive tract. 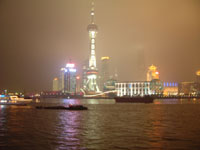 Hospital officials confirmed reports that the surgery was under way but would not provide any details. The officials, like many people in China not authorized to speak to media, would not give their names.

The twins were suffering from heart and liver problems, forcing the doctors to operate in hopes of saving at least one if not both of the girls.

The hospital, which has conducted many such operations, began planning the girls' separation surgery right after their birth. A business group in Taizhou, the twins' hometown, raised 200,000 yuan (US$25,000; Ђ 20,000) to help pay for their treatment, the newspaper said.

State-run television said the medical team working on the girls managed to separate their livers after two hours of surgery, the AP reports.