After two weather delays and last-minute foam trouble, Discovery and a crew of seven blasted off Tuesday on the first shuttle launch in a year, flying over objections from those within NASA who argued for more fuel-tank repairs. 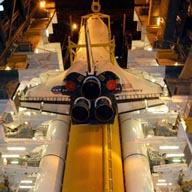 The majestic shot NASA's first on Independence Day was only the second shuttle flight since the Columbia was brought down 3 1/2 years ago by a chunk of insulation foam breaking off the fuel tank.

The foam problem resurfaced during last July's flight of Discovery and again Monday, keeping the space agency debating safety all the way up to the eve of liftoff.

According to Newsday, upon its liftoff seconds before 3:38 p.m. under a mostly clear Florida sky, the shuttle's ground-rumbling ascent brought whoops of joy from an assembled crowd of NASA employees, special guests and astronauts. "Go, go, go!" they shouted.

"It's about the best fireworks you could have on the Fourth of July, as far as we're concerned," said veteran astronaut James Reilly, who flew aboard shuttle missions in 1998 and 2001.

The shuttle blazed upward, louder than any fireworks display, until its bright yellow flare disappeared into the blue on its way to a rendezvous with the International Space Station during a 12-day journey. Mission STS-121, the 32nd flight for Discovery, but only the second since the Columbia shuttle disaster in 2003, will focus on safety and support for the partially completed space station.

"Good luck and have some fun up there," mission control told Discovery's crew of five men and two women minutes before liftoff.

"Thank you, we will," replied Discovery Commander Steven Lindsey, adding, "For all the folks on the Florida east coast, we hope to very soon get you an up-close and personal look at the rocket's red glare."

For the 7 astronauts on board, the firing of the solid rocket boosters and the blast-off has to be the best "fireworks" they've ever experienced on a Fourth of July holiday. Minutes before launch, commander Steven Lindsey seemed to confirm that when he said: "I couldn't think of a better place to be on this July 4th."

Discovery is now on its way to the international space station (ISS) on a 12-day mission to deliver a new crewmember, Thomas Reiter of the European Space Agency (ESA), as well as 5,000 pounds of supplies. The ISS Expedition 13 Commander Pavel Vinogradov and NASA Flight Engineer and Science Officer Jeff Williams watched the launch from the station and are preparing now to welcome the STS-121 crew.

Discovery will also be delivering food, water, and other supplies, as well as a new oxygen-producing machine tucked in the payload bay inside the multi-purpose logistics module Leonardo, built by the Italian Space Agency. The mission is the 115th shuttle flight and the 18th U.S. flight to the ISS. When finished, the ISS will have cost the United States, according to projections, in excess of $30 billion. It will then cost on the order of $1.5 billion a year to operate, informs The Planetary Society.