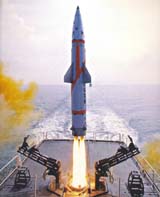 NHK said Japanese government officials were trying to determine whether the missile was a long-range ballistic missile that had been readied for launch recently, or whether it was a different missile.

North Korea had been believed to be preparing a test launch of its Taepodong 2 missile, which is believed able to reach parts of the United States.

Japanese officials were not immediately available to confirm the report.

The reported launch came after weeks of speculation that the North was preparing to test its advanced Taepodong 2 missile from a site on its northeast coast. Experts believe a Taepodong 2 could reach the United States with a light payload.

The prepartions had generated stern warnings from the United States and Japan, which had threatened possible economic sanctions in response.

Temperatures further heightened Monday when the North's main news agency quoted an unidentified newspaper analyst as saying Pyongyang was prepared to answer a U.S. military attack with "a relentless annihilating strike and a nuclear war."

The Bush administration responded by saying while it had no intention of attacking, it was determined to protect the United States if North Korea launched a long-range missile.

"Should North Korea take the provocative action of launching a missile the U.S. would respond appropriately, including by taking the necessary measures to protect ourselves," State Department spokeswoman Julie Reside said.

In Tokyo, a group of ruling party members called Tuesday for immediate economic sanctions against North Korea if the communist nation conducted the test launch.

The group of about 10 Liberal Democratic Party lawmakers were to submit their position Wednesday to a party task force, the official said on condition of anonymity, citing party policy.

It would be up to the task force to decide whether to relay the proposal to government, and the decision could take several days, according to Masashi Mitani, an aide to task force chief Ichiro Aisawa, reports AP.