In his first public comments since being sent off against Portugal at the World Cup, England star Wayne Rooney says he was "gobsmacked" when referee Horacio Elizondo produced a red card. 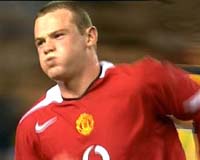 The incident occurred in the 62nd minute when Rooney broke through two tacklers, then stomped on the prone Carvalho's groin. England went on to lose the quarter-final in a penalty shootout.

"I remember the incident clearly and have seen it several times since on TV," the Manchester United striker said in a statement. "I am of the same opinion now as I was at the time, that what happened didn't warrant a red card. If anything I feel we should have had a free kick for the fouls committed on me during the same incident.

"I want to say absolutely categorically I did not intentionally put my foot down on Ricardo Carvalho. He slid in from behind me and unfortunately ended up in a position where my foot was inevitably going to end up as I kept my balance. That's all there was to it. From what I've seen in the World Cup, most players would have gone to ground at the slightest contact but my only thought then was to keep possession for England."

Portuguese winger Cristiano Ronaldo ran up to the referee to protest Rooney's actions, getting a shove from his United teammate in the process.

"When the referee produced the red card I was amazed, gobsmacked," Rooney said. "I bear no ill feeling to Cristiano (Ronaldo) but I am disappointed he chose to get involved. I suppose I do, though, have to remember on that particular occasion we were not teammates."

Ronaldo, who was caught winking to the Portugal bench after Rooney was ejected, denied a rift between the two, reports AP.