President Viktor Yushchenko met with leaders of parliamentary factions on Tuesday in a bid to end a political crisis caused by an eight-day opposition protest in parliament that has prevented the formation of a new government. 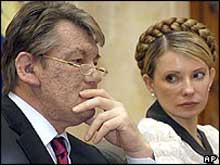 The pro-Russian Party of Regions began blocking the parliamentary podium last week while the new coalition was planning to call a vote on naming Yulia Tymoshenko prime minister. The party, led by Yushchenko's 2004 election rival Viktor Yanukovych, won the most votes in March parliamentary elections but fell short of a majority.

Three parties, including those of Yushchenko and Tymoshenko, agreed last month to form a majority coalition. Yanukovych's party has demanded chairmanships of key parliamentary committees and the first deputy speaker post, sparking coalition accusations of blackmail.

"I am sure that today we are very close to solving all the problems," Yushchenko told the politicians on Tuesday, according to his office.

His chief of staff, Oleh Rybachuk, sounded upbeat, saying party officials had found a compromise and were taking a break to work on the necessary documents with executive councils of their parties. "We have very good chances of unblocking the parliamentary work tomorrow," Rybachuk said.

But it was unclear whether the politicians would hash out a final agreement. After the meetings within parties, Yushchenko spokeswoman Irina Gerashchenko said Yushchenko was meeting with the other party leaders seeking to outline their "visions for resolving the crisis."

The majority coalition brings together the key political players in the Orange Revolution, the massive protests that erupted in 2004 after Yanukovych was declared to have received the most votes in presidential elections. That election eventually was declared invalid and Yushchenko won a rerun, reports AP.