German rider Matthias Kessler won stage three of the Tour de France by surging ahead of the main pack on the last climb Tuesday, while world champion Tom Boonen took the overall lead. 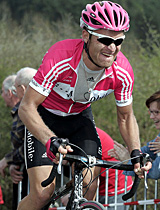 Kessler, part of the T-Mobile squad that lost leader Jan Ullrich to doping allegations before the Tour began last Saturday, held off sprinters to win the stage under a blazing sun.

Kessler was followed over the line by his Australian teammate Michael Rogers, who was five seconds back. Lampre rider Daniele Bennati was third, with Boonen fourth. It was the first stage win for 27-year-old Kessler in four Tours.

He said his T-Mobile team had been destabilized by the withdrawal of Ullrich, the 1997 Tour winner forced out of this year's race along with Tour of Italy champion Ivan Basso and other riders because of alleged links to a doping ring in Spain.

"But we are professional cyclists. For us, it is important to hold our heads high and look forward," said Kessler. He said he has been in contact with Ullrich, whom he called a close friend, but would not give details.

Boonen will wear the race leader's yellow jersey in his native Belgium on Wednesday's stage four.

"It's something that happens maybe only once every ten years, so I think it will be special," he said.

The world champion's jersey "is the most beautiful of all and now I'm wearing the second most beautiful jersey of all," Boonen said of the Tour's famed yellow shirt. "I'm on a good schedule for the future."

He also holds the green jersey awarded to the best sprinter, and is aiming to secure it at the finish in Paris on July 23, reports AP.