The soldiers' mission is to oversee rebuilding in the province of Uruzgan during the next two years, said spokesman Maj. Martijn van der Meijs. Soldiers will work in four-month rotations. 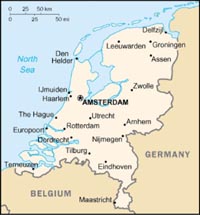 Uruzgan is one of four provinces where U.S.-led forces are carrying out a major thrust against resurgent Taliban rebels. Britain, Canada and Romania also are contributing to the 6,000 NATO-led troops.

The Dutch government deliberated for months before finally deciding to join the NATO mission. Opponents argued that reconstruction is impossible in what is essentially still a war zone.

A deployment task force of around 900 is preparing two bases in Tarin Kowt and Deh Rawod ahead of the arrival of the main force, the AP reports.

The Dutch troops will guard water supplies, schools and factories, "creating conditions that facilitate rebuilding" by helping secure and stabilize the country while the Afghan police and national army build up strength, he said.

Although two years have been allotted for the project, the government could extend it if necessary, Van der Meijs said.