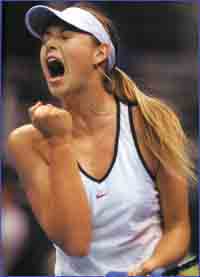 Sharapova, the winner in 2004, outplayed fellow Russian Elena Dementieva, 6-1, 6-4, on Centre Court in 70 minutes to reach the final four at the All England Club for the third time and sixth time at a Grand Slam event.

The fourth-seeded Sharapova will next face the winner of the quarterfinal between top-seeded Amelie Mauresmo and former French Open champion Anastasia Myskina, the Ap reports.

No. 3 Henin-Hardenne, who hasn't dropped a set in five matches, will play No. 2 Kim Clijsters or Li Na, the first Chinese player to get this far at a Grand Slam.