Marching in the streets and occupying schools, the teenagers' three-week revolt against their decrepit education system became known as the "Penguin Revolution," Chile's biggest protest since democracy was restored in 1990. 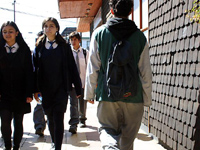 Chile's teenagers, the first generation born in the twilight of Gen. Augusto Pinochet's 17-year military dictatorship, have discovered strength in numbers, winning US$200 million in new spending - a 2.78 percent increase in the annual education budget - and representation on a council that will propose sweeping reforms.

It's all the more striking in a nation that had been cowed into silence by a dictatorship during which 3,100 people died or disappeared. The student protests have emboldened other groups - health care workers staging a one-day nationwide strike Tuesday for better working conditions, victims of violence demanding justice, even drivers upset about gasoline prices.

Felipe Anabalon, 18, says his parents were at school during the dictatorship and couldn't demonstrate "because they could have been killed."

Chile is an economic success story whose free-market foundations were laid during the dictatorship, and fewer than 20 percent live in poverty. But inequalities linger, most noticeably in its education system: schools lack books or winter heating, teachers are underpaid and indifferent, and even the poorest students must pay US$40 ( Ђ 31) to take the high school exams that decide whether they will get into college.

The students targeted a particularly unpopular law from the final days of the dictatorship which shifted most responsibility for funding education from government to municipalities, causing wide gaps in quality between rich and poor areas.

During the 15 years of post-dictatorship government, the students say, no one listened to their demands. Then Chile got its first woman president, Michelle Bachelet, and they hoped the mother of three would heed their pleas.