Fulfilling Cash‘s request, Rubin set up a studio in a bedroom of Cash‘s home in Tennessee, and sent an engineer who was on call for recording for most of the rest of Cash‘s life. The music legend died four months after his wife. 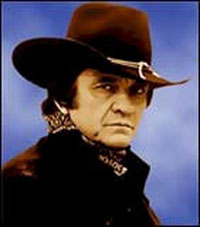 Results of some of those sessions are evident with Tuesday‘s release of "American V: A Hundred Highways," the fifth and penultimate in a series of discs made with Rubin that memorably capped Cash‘s career. It‘s the most moving musical rumination on mortality since Warren Zevon ‘s last album before lung cancer killed him.

Among the dozen cuts is "Like the 309," the last song Cash ever wrote. It‘s about a train, appropriate for the man who once sang about a prisoner hearing a train whistle pass.

During those last few months Rubin regularly sent Cash assignments of songs to work on. Cash would suggest his own, and his son encouraged him to record Bruce Springsteen ‘s "Further On (Up the Road)."

The one selection that seems ill-conceived is Hank Williams ‘ "A Legend in My Time," with a jarringly self-pitying tone.

Yet the Lightfoot cover is the disc‘s emotional center. Cash‘s voice is at its weakest, but his struggles to reach the notes and enunciate the words accents the aching tenderness of the lyrics.

"His ability to tell a story was so strong, that even when his voice was faltering, it sounded like that was part of the storytelling," he said. "I would always tell him that. I think it would make him feel better, but I did know that he wished he had better use of his instrument in the same way he always had before."

For most of his discs with Rubin, Cash would record vocals close to home and Rubin would direct construction of musical backing tracks in Los Angeles with veteran session musicians - people like Mike Campbell and Benmont Tench of Tom Petty and the Heartbreakers, the AP reports.

Then Cash would head West to oversee the final touches and re-do some vocals if he had to. The only thing different with "American V" was, of course, the elimination of that last step.

After Cash died, the tapes sat in storage. Rubin‘s a busy guy - his long list of production credits includes current best sellers by the Red Hot Chili Peppers and the Dixie Chicks - but that wasn‘t the reason. He couldn‘t deal with it emotionally.

Once he decided to attack the project, "it was initially traumatic and sad," he said. "But by the end of the first week it felt uplifting and positive. We felt like Johnny‘s presence was overseeing what was going on."

Probably because of Cash‘s condition and the song selections, it‘s a slow-tempo affair. The exception is "God‘s Gonna Cut You Down," with an inventive arrangement that features hand-claps and the stomping of feet.