The villagers - who now number 69 - began arriving Saturday, trekking in groups for nearly 20 hours through jungles and scrub to reach the Mankeni, where they were sheltering in a Church and a school. 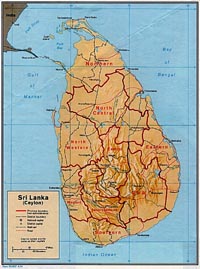 They said members of the Liberation Tigers of Tamil Eelam, the rebels' formal name, were forcing all able-bodied people in the village between 14 and 55 years of age to undergo training.

In Colombo, military Spokesman Brig. Prasad Samarasinghe said at least 16 girls and six boys were below the age of 18.

The villagers said they had left everything behind - abandoning their homes and fishing boats, and fleeing with only the clothes they were wearing, the AP reports.

A pro-rebel website last week claimed that 6,000 civilians had been trained by the rebels in armed combat, suggesting the Tigers are gearing up for all-out war with the Sri Lankan military.