Brazil will try to put an end to Zinedine Zidane's farewell tour. 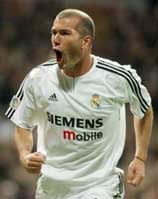 Brazil meets France on Saturday in the World Cup quarterfinals, in what could be Zidane's last career match if his team fails to beat the defending champion. Zidane has said he will retire from soccer at the end of this tournament.

"We know France is going to be a difficult opponent," Brazil striker Robinho said Wednesday. "But we hope Zidane will have to end his career against us."

The Brazilians still haven't forgotten Zidane's two goals in France's 3-0 victory over Brazil in the 1998 final to win the title.

"I was really little, but it's a sad memory," said the 22-year-old Robinho, Zidane's teammate at Spain's Real Madrid and whom he calls a friend. "I hope the story will be different this time."

Zidane helped France advance to the quarterfinals on Tuesday by setting up the deciding goal and then scoring one of his own late in the team's 3-1 victory over Spain.

"I hope he makes his last World Cup match on Saturday," said Brazil's assistant coach Mario Zagallo, who was Brazil's manager in 1998. "I don't know if it's going to be his last (career) match, but I hope it's his last match at this World Cup."

Zidane will end a 12-year international career which also saw him lead France to the 2000 European Championship. He was selected FIFA World Player of the Year three times. At club level, he has won every major honor with Juventus and Real Madrid.

"He regained his form during this World Cup," said Brazil defender Cris, who plays for five-time French champion Lyon. "If you let him do his thing, he'll unbalance the game so we have to pay special attention to him. He is the most dangerous player."

Zidane retired from the French national team after France was eliminated by Greece at the 2004 European Championship. He returned in August 2005 in time for France's final four World Cup qualifiers.

Ronaldo, Cafu and Roberto Carlos started in the final in which Zidane ended Brazil's title hopes.

According to Robinho, Zidane has never belittled Brazil.