A spokeswoman for the government said the state of that deal was unclear. 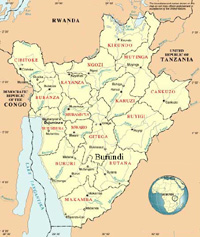 All of the central African country's main rebel groups from the majority Hutus have signed peace deals, leading to democratic elections last year that established a new government.

Only the National Liberation Force has opted out of the deals aimed at ending the conflict between the Hutu ethnic majority and the minority Tutsis, who have dominated Burundi's government, economy and military in the 44 years since the country's independence from Belgium.

But on June 18 in Tanzania, the group signed a tentative agreement to end hostilities and both sides are committed to negotiating a comprehensive cease-fire by July 2, the AP reports.

On Monday, a splinter faction of the National Liberation Force agreed to hold talks with Burundi's government in South Africa.

Burundi's conflict has killed more than 250,000 people, most of them civilians who died of disease and hunger. The war started in October 1993, when Tutsi paratroopers assassinated the country's first democratically elected president, a Hutu.