Energy ministers from Turkey, Bulgaria, Romania, Hungary and Austria signed an agreement to build the Nabucco gas pipeline at a meeting in the Austrian capital Monday, Austrian media reported. 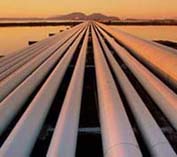 The 3,400-kilometer (2,100 mile) pipeline Nabucco pipeline was the EU's most important energy project and would remain so in years to come, Austrian Economy Minister Martin Bartenstein, whose country currently holds the rotating EU presidency, told the Austrian broadcaster ORF.

Construction of the pipeline is scheduled to begin in 2008, with the first gas expected to start flowing in 2011, the Austria Press Agency reported. Construction is expected to cost between Ђ4.6 billion (US$5.8 billion) and Ђ5 billion (US$6.3 billion), according to APA.

The pipeline, which would cross Turkey, Bulgaria, Romania, Hungary and Austria, aims to transport Caspian region and Middle East gas to the European Union, reports AP.