Warren Buffett's contribution of about $1.5 billion (Ђ1.2 billion) a year to the Bill & Melinda Gates Foundation will be used to seek cures for the world's worst diseases and improve American education, Bill Gates said Monday. 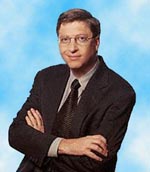 "There is no reason we can't cure the top 20 diseases," Gates said while appearing with Buffett during a donation ceremony at the New York Public Library.

The Buffett and Gates families, as well as onlookers, were beaming as the so-called Oracle of Omaha officially made his benevolence a reality.

"There is more than one way to get to heaven, but this is a great way," said Buffett. He presented the biggest gift to Gates, and $1 billion (Ђ0.8 billion) donations to his own foundation and the foundations run by each of his three children.

"It's easy to sign. I just signed, "Dad,"' Buffett joked while handing one of the donation documents, a stock transfer letter, to his daughter, Suze Buffett.

Buffett said he had made some suggestions about how to use the money. But "I think their judgment above the ground is going to be a lot better than mine 6 feet below the ground," he quipped at a later appearance.

In a letter dated Monday, Buffett had informed Bill and Melinda Gates that the first donation of Berkshire Hathaway Inc. stock would go to the foundation next month.

The foundation, which has assets of $29.1 billion (Ђ23.2 billion), spends money on world health, poverty and increasing access to technology in developing countries. In the United States, it focuses on education and technology in public libraries, reports AP.