President George W. Bush said Monday that North Korea should heed warnings by China and other nations not to test-launch a long-range ballistic missile. 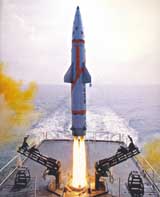 Bush urged North Korean leaders to declare "what they have on top of that vehicle, and what are their intentions."

Kim Jong Il's communist North Korean government has rattled the world by apparently preparing to test a missile that possibly could reach the western United States.

"I have made clear to our partners on this issue that would be Japan and South Korea and China and Russia that we need to send a focused message to the North Koreans and that this launch, you know, is provocative," Bush said, talking with reporters in the Roosevelt Room of the White House.

"And I was pleased to hear that the Chinese have delivered that message to the North Koreans," Bush said. "And we would hope that the leader in North Korea listen to the Chinese.

China, a key provider of aid to impoverished North Korea, is believed to be the only country that has considerable leverage with Pyongyang.

Bush said he did not know what North Korea's intentions were.

"That's part of the problem," he said. "It's a nontransparent society that ought to be sharing its intentions with the rest of the world."

On tactics, there is at least one difference with a key ally, Japan, which said Monday it would consider food sanctions among other options against North Korea.

"It is a matter of general policy that we don't believe in using food as a weapon," State Department spokesman Sean McCormack said.

McCormack said the United States had been generous in providing food aid through the World Food Program, but U.S. donations were halted over questions whether the food was getting to the people for whom it was intended, McCormack said.

The World Food Program has reduced its contributions, and the United States has provided no food aid to that reduced program, McCormack said.

On another front, the spokesman deflected suggestions by a number of U.S. senators, including Richard Lugar, chairman of the Foreign Relations Committee, that the United States deal directly with North Korea.

McCormack said that during the talks North Korea has had with the United States, Japan, South Korea, China and Russia, there were one-on-one discussions and "there is a possibility to talk about a number of different issues" if the six-party talks were to be resumed, reports AP.