Belarus orders freeze of any assets of Bush and Rice 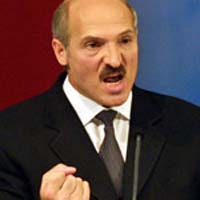 Belarus orders freeze of any assets of Bush and Rice

It was unclear whether Bush or Rice held any such assets in Belarus, and U.S. Embassy officials were not immediately available for comment.

The move came in response to Washington's decision last week to impose sanctions against Belarus' authoritarian President Alexander Lukashenko and other senior officials that involve freezing all of his assets held in the U.S. and forbidding Americans from doing business with him, according to the AP.

The U.S. and the European Union introduced the sanctions against Lukashenko -often described by Western countries as "Europe's last dictator" -after he won a third term in March 19 elections deemed fraudulent by Western governments.