Somali father forces his daughter to be circumcised, sentensed to 4 years

The 41-year-old man, identified as Ali Elmi Hayow, is a Swedish citizen. He was arrested in March on suspicion of having had his daughter circumcised during a visit to Mogadishu in January 2005, the court documents said. 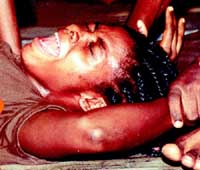 Somali father forces his daughter to be circumcised, sentensed to 4 years

The Goteborg district court in southwestern Sweden also found Hayow guilty of having forced his daughter to accompany him on the trip to Somalia, and ordered he pay her damages in the sum of 346,000 kronor ( Ђ 37,500; US$46,000), the AP reports.

Female genital mutilation - often called female circumcision and also known as FGM - has been banned since 1982 in Sweden, but the charges were the first such raised since the law took effect. The law also prohibits children from being taken abroad for the procedure.

Henrikson said the charges were based on a medical examination as well as statements from the daughter.

An estimated 130 million women have been circumcised, mostly in Africa, the Middle East and some Asian countries, and some 3 million women and girls undergo female genital mutilation each year, according to the U.N. health agency.