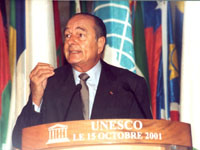 Sixteen countries were on hand in Paris for the summit, including Australia and New Zealand, to discuss political, economic and environmental issues facing the region.

Australia, represented by Foreign Minister Alexander Downer, boycotted the first such summit in 2003 because of tensions with Paris over French nuclear tests in the South Pacific.

France fancies itself a Pacific power due to its French Polynesia possessions, and has been mending fences with Australia and other regional states since the nuclear tests in 1995, the AP reports.