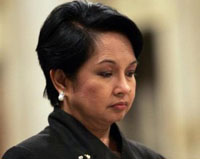 Her trip came just days after she abolished the death penalty in her country, a move warmly welcomed by the Vatican. Her office said she would tell the pope she acted "in the name of life for a world of peace and harmony."

The Vatican announced the meeting, but gave no immediate details of their talks.

The Philippines is a predominantly Roman Catholic country, according to the AP.