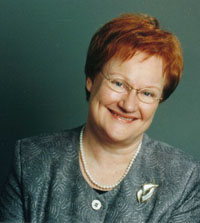 Halonen meets with President Heinz Fischer and Chancellor Wolfgang Schuessel of Austria, which is wrapping up its six-month leadership of the 25-nation bloc. Finland officially takes over on Saturday.

Finland has said it will push for stability and reforms in the western Balkans during its presidency. It also plans to pursue an initiative of increased cooperation between the EU and Russia, the AP reports.