Beckham bends it in for England and midfielder Maniche scores another gem for Portugal. Both games ended 1-0, enough to see the two teams face each other in the last 8. Portugal will miss Deco (sent off only God knows why) but England will have to put in a better performance to avoid a thrashing. 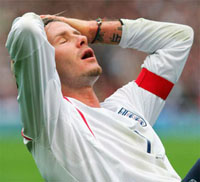 A Beckham bender on the hour spelt the difference between the two sides, after an early fright, when Tenorio, alone in front of goal, saw his shot deflect off Ashley Cole’s foot and hit the bar.

In the rest of the first half, England had 4 half-chances against Ecuador’s one. Gerrard fired into the clouds after 17’ from the edge of the area and after 28’, Lampard’s shot was charged down, while Ashley Cole’s pass to Rooney inside the area was so accurate it hit him on the back. Rooney was again the danger man on 41’ but he was crowded out of the area.

Edison Mendez had earlier come close for Ecuador on 19’ with a low shot cut aside by Ferdinand.

After the break, Gerrard had fired another weak shot at goal on 49’ but Beckham’s marvellously taken free kick ten yards out from the right-hand edge of the area livened up the England stands and bench.

First Castillo for Ecuador on 65’ and a Rooney/Lampard move on 72’ created half chances before Rooney put Mora to full stretch after 75’. In the end, England sat back on the lead and Ecuador never seemed to have the belief they could do it.

Holland started well with Van Bommel shooting just wide after 2’. Shortly afterwards he was booked for the first of two horrendous fouls on Cristiano Ronaldo who limped off in tears after 32’, substituted by Simao Sabrosa. Boulahrouz committed the second (getting a yellow card) after 7’.

Maniche broke the deadlock after a fine move from the left, Deco and Pauleta linking up, slipping the ball to Maniche who rifled home from his favourite position, hovering just outside the box and cutting in.

Costinha, booked after 31’ for a foul on Cocu was lucky not to get his second yellow five minutes later but after 45’ was sent off for handball.

In the second half, the result did not change but the game did, with three more red cards in a game of nerves but not of extreme violence. Khalid Boulahrouz got his second yellow after 63’, Deco after 78’ (for a reason only the referee understands) and Van Bronckhorst after 95’, with the game already over. An emotional game, in which Holland had their chances (20 shots against 10) but with someone in the Portuguese defence called Ricardo Carvalho, which means “oak”...

Portugal will miss Deco against England, a team which will have to raise its game if it wants to reach the semi-final stage.