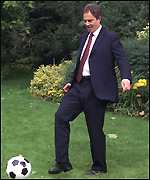 The secret for England's success in Germany was for the players to relax, Blair advised.

"They just need to get out there and enjoy their football," he said.

Asked about England's two unimpressive victories so far in Group B, Blair said: "If you don't play good football, then you won't win (the trophy) because in the end you're up against sides who are too good."

Blair was appearing on BBC Radio Five Live to take questions from callers to the "606" show.

Blair, a supporter of English Premier League team Newcastle urged the country to back England ahead of Tuesday's game against Sweden.

"At this stage the most important thing is we get behind the team," Blair said, warning Sweden will be "the first time we've had a really, really testing time from the opposition."

The prime minister believed England could win the tournament, and that the team "only produce their best when they're up against it."

Called "Tony" by many callers to the show, Blair also praised the peaceful conduct so far of English fans at the World Cup.

Blair was asked if he would make sure the English got a public holiday if their team won the World Cup, for the first time since 1966.

"I can't because there's a whole set of protocols you have to go through," he answered, before adding: "Let's win first," reports AP.