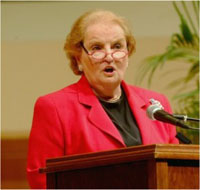 Speaking after an investors' conference in Moscow, Albright also criticized the U.S. invasion of Iraq, saying it had encouraged Iran and North Korea to push ahead with nuclear programs.

Albright, who served as the United States' top diplomat under President Bill Clinton, suggested that Russia did not meet all the requirements for membership in the Group of 8 major industrialized nations. Russia, which is hosting the group's summit in St. Petersburg next month, was admitted to the G-8 during the Clinton presidency.

In particular, she said that Russian state-controlled gas monopoly OAO Gazprom was being used for political ends, according to the AP.