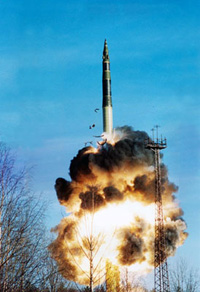 Over the weekend Condoleezza Rice, US secretary of state, urged Beijing to put pressure on Pyongyang to cancel plans to fire the intercontinental ballistic missile.

The missile has a range of 3,500 to 6000 kilometres and is believed to be able to reach America, Telegraph.co.uk reports.

Australia, South Korea and New Zealand have also urged North Korea to cancel the launch amid fears the country is pushing ahead with its nuclear weapons program.

Japan would need to respond "harshly" in consultation with the United States if North Korea launched a long-range ballistic missile, Japanese Prime Minister Junichiro Koizumi said on Monday, adding that Tokyo was taking various steps to persuade Pyongyang not to do so, ReutersAlertNet reports.