Jefferts Schori, bishop of Nevada, was elected Sunday as the first female presiding bishop of the Episcopal Church, the U.S. arm of the Anglican Communion. It is the latest groundbreaking and potentially divisive move by the American denomination. 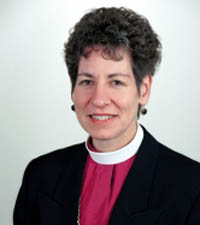 Three years ago, Episcopalians stunned the communion by consecrating the first openly gay bishop - V. Gene Robinson of New Hampshire. The Episcopal General Convention, the national meeting where Jefferts Schori was elected, will decide this week whether to appease angry overseas archbishops by temporarily barring homosexuals from leading dioceses, the AP reports.

As presiding bishop, Jefferts Schori will have to explain the church's decision to elevate Robinson, which she supported, to the Anglican leaders who don't even consider her ordination valid. Many Anglicans believe women should not be ordained.

Only two of the 37 other Anglican provinces - New Zealand and Canada - have female bishops, although some allow women to serve in the post.

Asked how she would deal with such opposition, Jefferts Schori recalled a science research cruise she joined where the captain, who thought she didn't belong, vowed not to speak with her.