Roberto Carlos: Possible Chelsea move not on my mind

Brazil defender Roberto Carlos says he is not thinking about his possible move to England's Chelsea, but admitted he has started learning English. 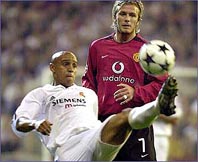 Roberto Carlos: Possible Chelsea move not on my mind

The Real Madrid left back, who last month confirmed Chelsea offered him a three-year contract, didn't say on Tuesday whether a deal had been reached yet.

"I'll only talk about this after the World Cup," Roberto Carlos said before one of Brazil's pre-World Cup training sessions in Koenigstein. "I'll leave all negotiations to my agent."

Roberto Carlos has been with Real Madrid since 1996. He helped the club win three Spanish league titles and three Champions League trophies.

The 33-year-old defender also said he was not considering retirement yet, and he hoped to be known as one of the best players in his position.

"It would be important to be recognized, to have people talking about me when they mention the best ever in the position," he said, reports AP.