The agreement commits the sides to securing conditions for the voluntary return of those who fled the conflict in Kosovo, such as physical and material security, freedom of movement, return of property, reconstruction of burned homes and equal employment opportunities, according to a copy obtained by The Associated Press before the signing ceremony. 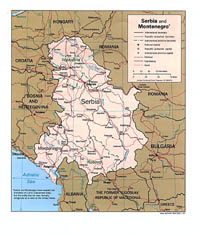 The signing is a rare indication of agreement between Serbia and Kosovo and comes at a sensitive time for the province. On Monday, local Serbian officials in the northern part of Kosovo said they would sever ties with provincial institutions that are dominated by the ethnic Albanian majority, following a number of incidents they blame on ethnic Albanians.

A Kosovo Serb hardline leader, Marko Jaksic, in a statement to The Associated Press, insisted Tuesday the boycott was not designed by the Serbian government in Belgrade, but was a decision taken by the local Serb leaders in the northern part of the province.

Jaksic also suggested possible creation of Serb vigilante groups to guard Serb-populated villages, if attacks continue against the minority group - a move similar to those of Serb communities in Croatia when Yugoslavia began to unravel in the early 1990s.

At the end of the Kosovo war, more than 200,000 Serbs and other minorities streamed out of Kosovo, fearing revenge attacks after a NATO air war ended a Serb crackdown on the province's independence-seeking ethnic Albanians.