2 people, suspected of massacre in Northern Irland, arrested by police 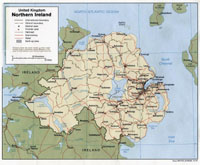 2 people, suspected of massacre in Northern Irland, arrested by police

Six men aged 34 to 87 were killed and five injured when anti-Catholic extremists armed with two assault rifles poured automatic fire into a pub crowded with Catholics watching a World Cup soccer match. An outlawed Protestant group, the Ulster Volunteer Force, claimed responsibility, but nobody was ever charged with the killings in Loughinisland, a Catholic village south of Belfast, the AP reports.

The Police Service of Northern Ireland said a 45-year-old man and a 38-year-old woman were arrested in Belfast, but declined to identify them or give any other details. Under British anti-terrorist legislation the pair could be questioned for up to two weeks before being charged or released.