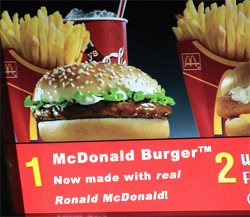 Schwartz was speaking after an opening ceremony for the company's new food studio and quality center in Hong Kong , which will co-ordinate menu development and quality control in Asia , the Middle East , and Africa .

McDonald's opened its first Chinese drive-through in the southern province of Guangdong, near Hong Kong, last December. It added a second one this year in Guangdong and a third one in Shanghai, Schwartz said.

Beijing will have one by next year, and many retail complex developers have expressed interest for similar outlets, he said.

The chain is capitalizing on the increasingly mobile middle class in China , which saw its auto market grow 30 percent last year to 5.7 million vehicle sales, according to local industry figures just behind Japan 's 5.8 million.

McDonald's first ventured into the Chinese market 15 years ago. The chain says China represents the company's most significant growth, and now operates 760 stores in the country, reports the AP.