Tunnel between Denmark 's two main islands Zealand and Funen was damaged by fire. It reopened Tuesday for train traffic. The fire broke out 9:30 p.m. Monday in an engine in the northern tunnel of the Storebaelt rail link. The blaze was quickly put out. None workers wounded. 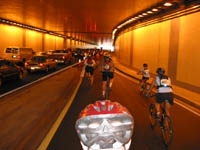 The southern tube was closed overnight to allow emergency units to reach the fire. "The accident was serious enough but caused no major damages," Flemming Fejer Nielsen, a fire brigade spokesman, told the TV2 channel. "The tunnel itself has not been damaged."

The cause of the fire was not immediately known.

The 18-kilometer-long (11-mile-long) Storebaelt rail link was opened in June 1998. It connects Zealand, where Copenhagen sits, with Funen, which is linked by a short bridge to the Jutland peninsula and the European continent.

Minor delays were to be expected as the southern tunnel reopened for traffic, Tony Bispengaard of the national railway DSB said, reports the AP.