We don’t forget Orange revolution, as new flash of aggression happens in Ukraine . The angry welcome in the Crimean port of Feodosiya led by a radical pro-Russian party and the Communists is widely seen as the opening volley in the battle over Ukraine 's bid to join NATO, an issue now forced to the top of the nation's political agenda. 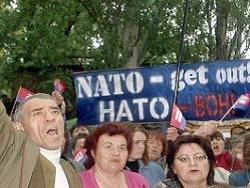 Analysts say President Viktor Yushchenko's opponents and Moscow have sensed the government's weakness after its party's humiliating, third-place showing in March parliamentary elections and drawn-out talks to put together a new government. They are seizing the chance to destroy Kiev 's hopes to receive a NATO invitation in 2008.

"The war for Ukraine has started," said Hrihoriy Perepelytsya, director of the Foreign Policy Institute of the Foreign Ministry's Diplomatic Academy . "What is happening in Feodosiya is just a piece of a more powerful anti-NATO campaign ... Clearly, the goal is to discredit Ukraine as a potential NATO candidate."

His supporters argue that if Ukraine doesn't join NATO, Kiev will inevitably slide back under Moscow 's influence or risk being left in an unprotected no man's land between Russia and the West. NATO accession has also been billed as a first step toward the ultimate prize: EU membership, with its considerable economic advantages.

A key test is expected to come Wednesday, when the government tries to win parliamentary permission for foreign troops to be on Ukrainian territory. A victory would allow the Marines, who are biding their time at a Defense Ministry resort, to go ahead with their three-week project to refurbish the Stary Krym facility, which is slated to be used in a mid-July training exercise involving U.S. and other NATO members, reports the AP.