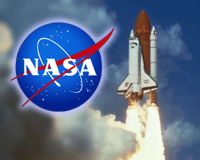 "It gives us a stability and enduring role in the long-term future of where the agency is headed," stressed Woodrow Whitlow Jr., director of NASA Glenn. "We are now a major part of the agency's future."

The project is an economic boost for NASA Glenn, which was struggling to remain viable as the space agency cut its aeronautics research the center's lifeblood to pursue President George W. Bush's vision of returning to the moon and sending people to Mars.

Though the Ohio center will receive more work, the overall division of labor that served NASA during the Apollo and shuttle eras will remain the same for the new program, named Constellation.

The brains of human space flight mission operations will remain in Houston , Texas , at Johnson Space Center . The muscle overseeing the design of the space capsules and the launch vehicles stays at Marshall . And the legs the launch site remains at Kennedy Space Center in Cape Canaveral , Florida .

NASA Glenn also will lead work on the adapter that connects the exploration vehicle to the rocket that will carry it into orbit. Portions of the rocket will be designed at NASA Glenn as well. "We will be retooling Glenn to participate more actively in the mainstream of what it is NASA is being asked to do," NASA Administrator Michael Griffin noted. "It's an opportunity. It's a challenge. It also presents difficulties", reports the AP.