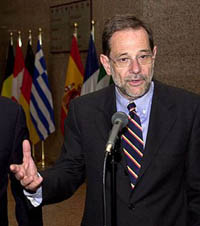 Solana went into closed door talks with Larijani in the Supreme National Security Council building in central Tehran. No journalists in the building.

Solana had arrived in Tehran on Monday and told reporters at Tehran airport that the West wanted "to start a new relationship on the basis of mutual respect and trust."

Solana said he believed the package would "allow us to engage in negotiations based on trust, respect and confidence."

Details of the proposals have not been made public, but an early draft indicated that if Iran agrees to stop uranium enrichment, the world would offer it help in building nuclear reactors, a guaranteed supply of nuclear fuel, and European Airbus aircraft.

The United States has reportedly sweetened the offer by saying it would lift some bilateral sanctions on Iran, such as a ban on Boeing passenger aircraft and related parts, if Iran agrees to an enrichment freeze.

In a major shift last week, the United States agreed to join in multinational talks with Iran on its nuclear program if the country suspended enrichment, reports the AP.