Much of this border zone is remote and inhospitable - generally too rough to hike through unless you're a black bear or a pronghorn sheep, species that have flourished in the area's deserts and mountains. 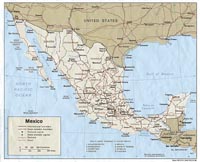 While the proposed Rio Bravo del Norte Natural Monument is only about 30 feet wide (10 meters), it will connect two large protected areas south of the river. When a third nature reserve, known as Ocampo, is created this year, the protected areas in Mexico will form a "wall" of wilderness, matching Texas' Big Bend parks foot-by-foot (meter-by-meter) along the border.

Big Bend National Park has had some problems with migrant and drug trafficking, but superintendent John King says extending protected areas on either side of the border will likely keep the problem from getting worse.

The strip protects a much longer stretch of riverbank, from just downstream of the Texas border town of Presidio to the outskirts of Laredo, Texas, raising the possibility of still larger reserves that will serve as biological corridors, encouraging four-footed traffic but making it exceedingly difficult for humans to pass.

In other border areas where U.S. reserves are not fully matched in Mexico, such as Arizona's Organ Pipe Cactus National Monument, primitive roads and ramshackle hamlets have sprung up on the Mexican side to provide supplies and staging areas to illegal border crossers. They have then overrun U.S. wilderness areas, the AP reports.

As the U.S. puts up more fencing near cities and popular crossing zones, migrants will likely be looking for new routes in remote areas.