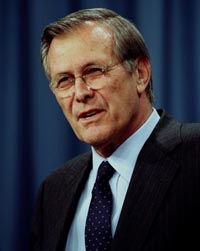 He was scheduled to meet with Indonesian President Susilo Bambang Yudhoyono, Defense Minister Juwono Sudarsono and other government officials before leaving.

Sudarsono said last week that Rumsfeld would be told that Washington should not force its approach to fighting terrorism on other countries.

Rumsfeld also was scheduled to discuss improved military-to-military relations between the two nations during his one-day visit - from equipment needs to maritime security in the Malacca Strait, according to the AP.