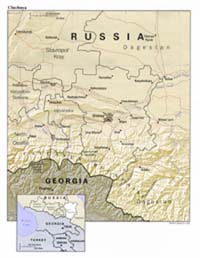 Ingush Interior Minister Beslan Khamkhoev said in televised comments that the fighters had fled from the southwestern Chechen district of Achkhoi-Martan after a battle with Chechen police. They moved into Ingushetia, pursued by Chechen forces, and they holed up in a house basement in the village of Nesterovskaya, he said.

Three of the fighters were killed during the gunbattle at the house, said Roman Shchekotin, spokesman for the federal Interior Ministry's southern district, along with one Chechen police officer. Four other police were wounded.

Khamkhoev said three police officers were wounded during the pursuit into Ingushetia and one fighter was killed.

Russian news agencies reported that the battle ended when militants blew themselves up in the basement, the AP reports.

A surge of bombings and gun attacks in Ingushetia, Dagestan and other parts of Russia's restive North Caucasus has recently led to fears that violence is spiraling out from Chechnya.

Chechen rebels have been involved in violence in other parts of the ethnically mixed region, whose population is mostly Muslim. The region suffers from poverty, corruption and the growing influence of radical Islam.

In Dagestan Wednesday, police shot and killed two gunmen in the town of Buinaksk. Dagestani Interior Ministry spokeswoman Anzhela Martirosova said the two were intending to attack police officers when residents and teachers at a nearby kindergarten alerted authorities.