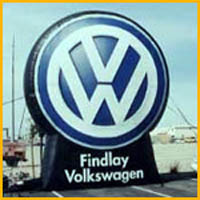 More than 20,000 workers walked off their jobs, halting assembly lines at the three factories - two in the state of Sao Paulo and one in the southern state of Parana - that have a combined daily output of 2,500 vehicles, Volkswagen's press office said.

The company declined to comment on the amount of lost revenue the strike is expected to cause.

Unions representing autoworkers at the three plants say Volkswagen intends to fire close to 6,000 workers as part of a plan to cut labor costs by 25 percent.

Volkswagen has declined to say how many jobs will be cut but the company has acknowledged that the plan, announced in early May, includes the dismissal of "thousands of workers."

Workers at Volkswagen's truck- and bus-production plant in the state of Rio de Janeiro and its engine factory in the city of Sao Carlos, Sao Paulo state, did not join the strike.

Volkswagen's press office said the company's cost-cutting plans did not include the Rio de Janeiro plant and would only have a minimal impact in Sao Carlos.